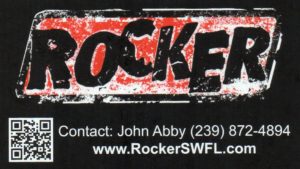 Originally ROCKER began its musical career in 1978 as a Fort Myers based guitar driven hard rockin’ band. They had some shining moments along the way as they were offered a record contract with a major label and opened shows for acts such as Alice Cooper, Billy Squire and many others. However, life goes on. They started families and got day jobs that turned into careers. Eventually the group disbanded and they went about their lives, but always stayed in touch with each other.​